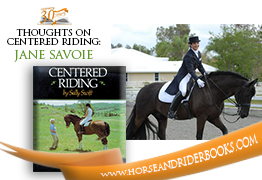 Popular riding clinician and motivational speaker Jane Savoie (www.janesavoie.com) was the Reserve Rider for the US Dressage Team at the 1992 Olympic Games, coached at the Olympic Games in 1996, 2000, and 2004, and is the author of a number of bestselling books and DVDs. In honor of the 30th anniversary of the publication of CENTERED RIDING, she shared her memories of how the book impacted her career:

“When I heard 2015 marked 30 years since Trafalgar Square Books published Sally Swift’s CENTERED RIDING, I was momentarily stunned. At one time, 1985 didn’t seem so long ago! For me, that was a year of really hard work—learning, training, showing, teaching. I was riding with Robert Dover (our current US dressage technical advisor/chef d’equipe) then, and discovering Grand Prix on my schoolmaster Sacramento while bringing up a young prospect named Evidence. Oh, and I was teaching a ton—on the road two to three weekends every month, doing clinics.

“The ideas brought to life so brilliantly in Sally’s book opened my eyes to the true power of visualization. Those who know me or who have seen me speak or used my online training programs will understand what a HUGE deal this is! I went on to harness a number of visualization techniques that helped not only with my own riding and training, but with my ability to teach others, as well as improve my life in a broader sense (that is, outside of horses). Sally also made me aware of the need to teach riders to examine their own attitudes and positions first—as opposed to immediately blaming the horse—when things go wrong.

“It was a full seven years after CENTERED RIDING came out that Trafalgar published my first book THAT WINNING FEELING!, which presented my approach to training your mind and shaping your attitude in order to achieve what you might not think possible. It was this formula that helped me overcome pretty significant challenges and eventually be named reserve rider on the 1992 Olympic dressage team. When I look back now, I can see how Sally’s teachings and CENTERED RIDING played a part in making these significant life events possible.”

Share your own CENTERED RIDING  memories and “aha” moments online and tag them #CenteredRiding30! And remember, all CENTERED RIDING books and DVDs are 30% off, the entire month of November.

Trafalgar Square Books, the leading publisher of horse books and DVDs, is a small, privately owned company based on a farm in rural Vermont.

2015 marks the 30th anniversary of the publication of CENTERED RIDING, the now classic text by Sally Swift. CENTERED RIDING, the book, has sold over half-a-million copies worldwide and has been published in 16 languages. For many horse people—across riding disciplines and state lines and national borders—it changed the way practical riding instruction could be disseminated, marking the first contemporary “how-to-ride” text that moved away from the formal riding books of the classical masters. The book went on to inspire an international organization devoted to riding instruction that continues to flourish today.

CENTERED RIDING was the first “horse book” published by Trafalgar Square Books—we are a small business housed on a working cattle and horse farm, tucked well away from main thoroughfares in the idyllic hills of rural Vermont. In the years following CENTERED RIDING’s release, TSB has focused on the acquisition and publication of books and DVDs on horses, horse care, and riding with one mission—for the good of the horse—in mind.

Since CENTERED RIDING, many TSB books have become bestsellers across riding disciplines, including:

GETTING IN TTOUCH (1995), which helped launch the phenomenal career of renowned animal behaviorist and horse trainer Linda Tellington-Jones.

THAT WINNING FEELING! (1997) by Jane Savoie, which was one of the first sport psychology books specifically for riders.

YOGA FOR EQUESTRIANS (2000) by Linda Benedik and Veronica Wirth, which introduced the idea of cross-training the rider for better riding performance.

BOMBPROOF YOUR HORSE (2004), a book that enabled mounted police officer Sgt. Rick Pelicano to show everyday riders how to make their horses safe in any situation.

CLINTON ANDERSON’S DOWNUNDER HORSEMANSHIP (2004), which introduced the Australian horseman’s method to readers at the dawn of his meteoric success.

TUG OF WAR: CLASSICAL VERSUS “MODERN” DRESSAGE (2007) by Dr. Gerd Heuschmann, which made public the controversial “Rollkur” practices that had dressage circles in turmoil all over the globe.

Click image to see a short video featuring some of our bestselling books and DVDs.

TSB now also distributes hundreds of educational DVDs for equestrians and is the exclusive North American distributor for PferdiaTV of Germany. TSB worked side-by-side with Cedar Creek Productions and Director Cindy Meehl to produce the international smash 7 CLINICS WITH BUCK BRANNAMAN (2012)—a seven-disc DVD set of instructional footage obtained during the making of the award-winning documentary film BUCK.

Since the publication of CENTERED RIDING by Sally Swift 30 years ago, TSB has published and/or distributed over 600 books and DVDs, regularly releasing 12 to 15 new equine titles each year. 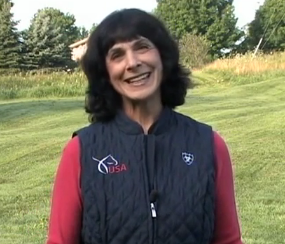 We were lucky enough to spend time with dressage rider, author, motivational speaker, and (now) dancing queen Jane Savoie while attending Equine Affaire in Massachusetts last week. Her vitality, enthusiasm, and vibrant energy reminded us why TSB is so proud to have published her books, including JANE SAVOIE’S DRESSAGE 101, THAT WINNING FEELING!, and IT’S NOT JUST ABOUT THE RIBBONS.

Here’s one fabulous lesson from Jane’s winning playbook from IT’S NOT JUST ABOUT THE RIBBONS:

At one time or another, you’re going to get discouraged about your riding. This might happen when you think you’re just not making any progress; you feel like you’re taking two steps forward and three steps back. Maybe it happens when either you or your horse are sidelined with an injury. Perhaps you get discouraged because your horse is so good at home, but he’s inattentive or disobedient when ridden in a clinic or a show.

Your reactions are perfectly normal, and it’s fine to be discouraged for the moment. The problem only exists if you stay that way. The antidote to “getting stuck there” is to be resilient.

Resilience is an important quality in every area of life but it seems particularly necessary if you’re going to survive in the horse business. How many times have you been chugging along, smoothly working toward a goal, and then you show up at the barn and discover your horse is lame and needs a month off? How many times have you felt like quitting because you’re riding so badly? At times like these, your resilience—your bounce-back ability—will help you stay optimistic and ready to soldier on.

It really doesn’t matter what the challenge is. You can get knocked down in any area of your life as you pursue your goals. But getting knocked down doesn’t matter. You never truly fail unless you quit. And if you’re resilient, you’ll be able to bounce back after disappointment and stay in the game.

It’s normal to get discouraged from time to time. It only becomes a problem if you stay there emotionally. Obstacles and setbacks shouldn’t stop you in your tracks. Look at “failure” in a positive light. It gives you necessary feedback. It tells you what doesn’t work so you can figure out what does. Remember: You never really fail unless you quit.

Here are five tips for making resilience your “bounce-back” secret to success in the saddle—to be resilient you must:

You can get all of Jane Savoie’s fabulous books and DVDs from the TSB online bookstore, where shipping in the US is FREE.

In a new review of the (not equestrian specific) book Nerve by Taylor Clark, the reading horseman’s go-to blog Great Books for Horse Lovers recommends pairing it with the “iconic” best-selling book IT’S NOT JUST ABOUT THE RIBBONS by international rider, trainer, and motivational speaker Jane Savoie.

This reminded me of all the fabulous tips (supported by wonderful graphic art colored with a dash of humor) Jane included in her book, a follow-up to her worldwide hit THAT WINNING FEELING! Jane is a master at providing the images we need to envision to shape our mind and attitude and thus achieve peak performance, both in and out of the saddle.

This is what she says about “belly breathing,” a common relaxation technique that many of us have heard of but few probably actually have mastered or are able to employ when we need it:

Jane says to start by watching your dog or cat as he or she sleeps (ideally, not in the midst of an exciting dream involving bacon or catnip). Rest a book upon your belly and breathe in so deeply you can see the book rise. Jane likes to use the image of plus/minus signs—she envisions inhaling plus signs (positive energy) through her nose and minus signs (negative energy) through her mouth.

You can order IT’S NOT JUST ABOUT THE RIBBONS, THAT WINNING FEELING!, and Jane’s newest book JANE SAVOIE’S DRESSAGE 101 at the TSB bookstore, where shipping in the US is always FREE.

And you only have ONE MORE DAY to sign up to win a $100 gift certificate to http://www.horseandriderbooks.com/. Click the green banner at the bottom of our home page or visit us on Facebook. The contest closes at the end of the day today (Friday).