Having a Lesson Barn Affair 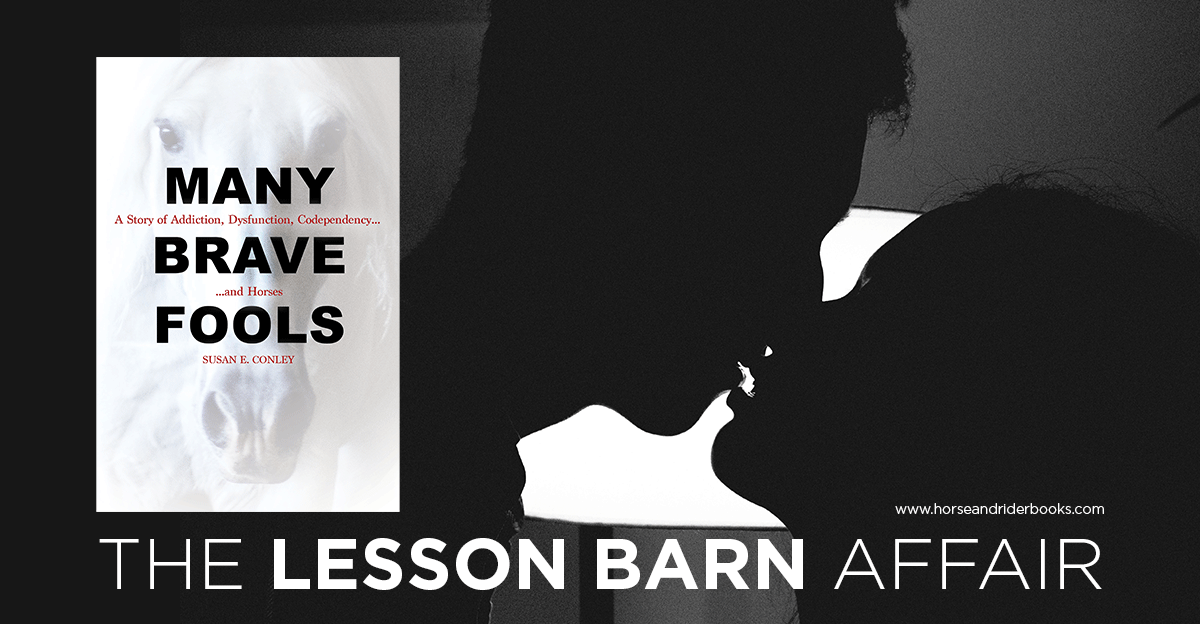 Switching trainers, moving from one barn to another, trying a new hairdresser…isn’t it amazing how all these things make us feel a sharp pang of guilt, like we are somehow being unfaithful? I mean, rarely is there a contract involved or even promises of fidelity, and yet…

Susan Conley’s new memoir MANY BRAVE FOOLS chronicles her discovery of riding and horses at the age of 42, and how her new passion helped her recover from years living in a codependent relationship with an addict. (Of course, horses introduced her to an addiction of her own.) In this excerpt, Conley shares the story of the first time she had a lesson barn affair and how ultimately, just like in her human relationships, her horse-life relationships were all about chemistry.

I had been riding exclusively at my first barn for one year and seven months when I decided to try a different stable, one that was on my side of town, for a private lesson.

Hermes was a strong, well-built cob. He had been brought in from the field just before my lesson, and he took a moment at the open door of the covered arena, every time we passed, to call for the friends he’d left behind. He was not in the least bit interested in me, and I wasn’t managing to engage his attention. He grudgingly trotted when I asked him to, and he refused to listen to my request for the canter at all, so the instructor waved a longe whip at him.

I got distracted by her whip. Hermes leaped to the left. I slid off to the right.

“You fell?” The instructor was incredulous.

You lashed the fucking whip at him, I thought. “Yeah, well,” I said.

I had landed in a damp patch on the ground. Let’s just say it was an aromatic bus ride home.

A couple of weeks later: same (new) barn, same horse, a group lesson this time, outside riding ring. A different instructor was busily chatting with some of her colleagues, leaving the riders to make their own decisions regarding rein changes and whatnot. I was once again trying to get Hermes to canter for me. The line of riders had halted at the M marker and would individually pick up canter between C and M before heading toward the fence, which was set up at B. (I could change barns but that crazy riding alphabet seemed to be following me.) We came around the corner and Hermes was motorbiking it, cutting it sharp/sharper/ sharpest. I leaned on the outside stirrup, off-effing-balance, and started to feel the saddle slip and slip…I went down. I fell softly onto the sand, and stood right back up.

No biggie. Except that the instructor came over, shaking her head, gesturing at the saddle, now completely over on Hermes’s offside.

“See that?” She put her hands on her hips and gestured at my horse and his gear, all askew. Everyone else, waiting for their turn to jump, stared.

She proceeded to lecture me on proper lesson preparation as she released the girth and righted the saddle. I was so pissed off my anger practically vaulted me off the ground and back in the tack. I was beneath her notice until we started to jump. She raised the rails on the fence to over two feet.

“Hermes—” She hadn’t even bothered to ask my name. “—you don’t have to do this.”

We trotted. Hermes still wouldn’t canter, not until we were a few strides away from the jump, anyway, but we took it perfectly.

Showed you, I thought. I certainly wouldn’t be coming back to this place anymore. Falls three and four were the height of ignominy; though the new barn was nominally closer to home, the affair was over. I went back to where I’d started.

I didn’t fall for Kilternan, my initial lesson barn, at first sight. Sure, I liked it right away, primarily because the place was laid back, the staff didn’t mind me hanging around (sometimes for a full hour before my lesson), and nobody passed comment, even though I was dressed like a complete fool for the first few weeks, wearing jeans and those silly boots and a borrowed helmet. I did strive to get my look increasingly right: jodhpurs, paddock boots, new headgear. I toughened up, abandoned the myriad layers and woolly scarf I initially swathed myself in, riding in just a T-shirt.

Horse owners asked me to do things like mind their mounts while they ran to get a hoof pick or hold their offside stirrup while they got on. I was becoming known, even if it was for being the crazy woman who took two busses all the way from the other side of town, a million miles away.

In the case of this love affair, distance was not an issue. I was learning that if a place gave off the right vibe, then I should be careful not to muck it up. There was a world of chemistry between horse and rider, rider and instructor, between the riders within a group lesson, and indeed, between the horses and the instructors. I wouldn’t ride Maverick when Angela was teaching the lesson. He adored her and always tried to show off, bucking more than usual, pelting for the perimeter after a jump, desperate to go fast, to show his favorite person what he was made of. When Emily was instructing us, Dancer would do everything in his power to stand by her. Once, we were waiting in the middle of the arena watching others take their turns over a jump, and when he heard Emily’s voice behind him, he turned a full one-hundred-and-eighty degrees to face her.

That kind of chemistry took time to build, and I knew you didn’t just throw it away.

MANY BRAVE FOOLS is available now from the TSB online bookstore, where shipping in the US is FREE.

Trafalgar Square Books, the leading publisher of equestrian books and videos, is a small business based on a farm in rural Vermont.

One response to “Having a Lesson Barn Affair”