I think it is Buck Brannaman who has often likened working with horses to parenthood. And, as a horse person and a mom, I concur it is strikingly similar. Loving someone and yet setting limits and saying “No” can be an exhausting act of balance. You don’t want to err too soft or too hard…and even when you think you might have it right, you cringe when you see that look of hurt in your child’s eyes after he’s been remonstrated; you feel badly when your horse sulks a bit after you push his nose away from your pocket.

Faced with this challenge, many of us wonder how the “magicians” of the horse world do it–how those who so obviously have close connections with their horses manage to find that balance between love and limits.

In GALLOP TO FREEDOM, the book he wrote with his wife, Magali Delgado, renowned horseman Frédéric Pignon explores this topic at length. And seeing as his spellbinding liberty acts were what made the original rendition of Cavalia an international phenomenon (he and Magali toured with their horses as part of the original lineup from 2003 to 2009), you have to think that maybe he’s got something in the mix about right:

I allow absolutely no biting or jostling: this is a rule that I start establishing with a young horse from the first day I work with him. In fact, with one that I do not know, I impose a strict limit as to how close he approaches me. No two horses are the same but as a guide I would suggest a distance of a forearm. Confidence breeds respect and vice versa. In liberty training, if there is mutual confidence between us, I can allow myself to tap the horse on his legs with my whip without causing him to run away—but only if my action is a justified reaction to something wrong or disobedient that he has done.

A common mistake is to do too much “snuggling up” to a horse from the beginning. You should keep the distance appropriate to the stage of your relationship. I don’t immediately let a horse invade my space. Quite apart from the danger of being bitten, it puts you on the wrong footing. Once there is total confidence and respect in both directions it becomes another matter.

It is not easy to define rule making. It may seem from what I have said that there are few rules and that the horse is encouraged to take the initiative. However, it is the case that rules are not only essential but that the horse functions the better for accepting certain guidelines. Here is the crux of the situation: you must not impose unreasonable rules that the horse feels he cannot accept with a willing spirit.

Man has deprived the horse of his natural state; the horse has been dragged into the world of humans and therefore it is the foundation stone of our relationship that we earn his respect before anything else. He has lost his freedom but we can give him protection, security, and respect. In return, he will give us respect and affection and recognize the behavioral limits that we set together.

In order to become important to a horse, we cannot remain neutral. I have to impose laws and make it absolutely clear what is not allowed. At the same time, I know that horses often crave reassurance even more than liberty so I must provide this. I have to encourage this craving and convince them that I am the person to satisfy the need. 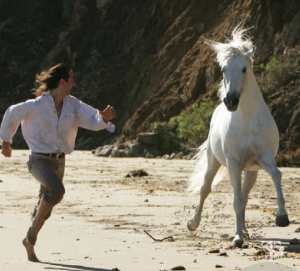 It has always amazed me how quickly a good chiropractor or osteopath convinces a horse that he is important to him. The horse understands in no time at all that the osteopath will relieve him of his aches and pains and therefore accepts him as a friend. This is why I think it is so important to spend time reassuring a horse and helping him relax rather than treating him with rewards. I often spend a quarter of an hour in the company of a horse, either in his stall or in the field, without asking anything of him. I just rub him gently and caress him and try to show him that there is all the time in the world; I am not going to rush him and I’m not going to make unreasonable demands.

If one of my liberty horses gives another a nip. I give him a tap with my whip. He knows he shouldn’t bite another horse and as long as I tap him with the right amount of strength, he will accept it; he will even put his head on my shoulder as if to say “I know, I know.” But if he only “looks” as though he is going to bite another horse and I give him a sharp tap instead of a warning word, that is not fair and he knows it. He runs away and this time I have to make it up to him by going to him. Even after an hour’s work I may still see in his eye that he is hurt and depressed.

The secret is to deploy the right amount of warning signals when I see a horse has something naughty in mind. “Don’t even think about it,” is a common enough warning between people and I have to find the equivalent for the horse, but it has to be one that he associates with his intention. He then says in effect, “Fair game.” 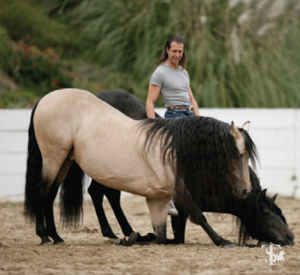 For more on Pignon and Delgado’s ideas about establishing a balance between love and limits, check out their bestselling books GALLOP TO FREEDOM and BUILDING A LIFE TOGETHER: YOU AND YOUR HORSE.

And, don’t miss your chance to train with them in person! They are doing a limited number of clinics in the US in March, or you can join them at their farm in Provence in May for a special retreat experience. For more information CLICK HERE.

Trafalgar Square Books, the leading publisher of equestrian books and DVDs, is a small business based on a farm in rural Vermont.