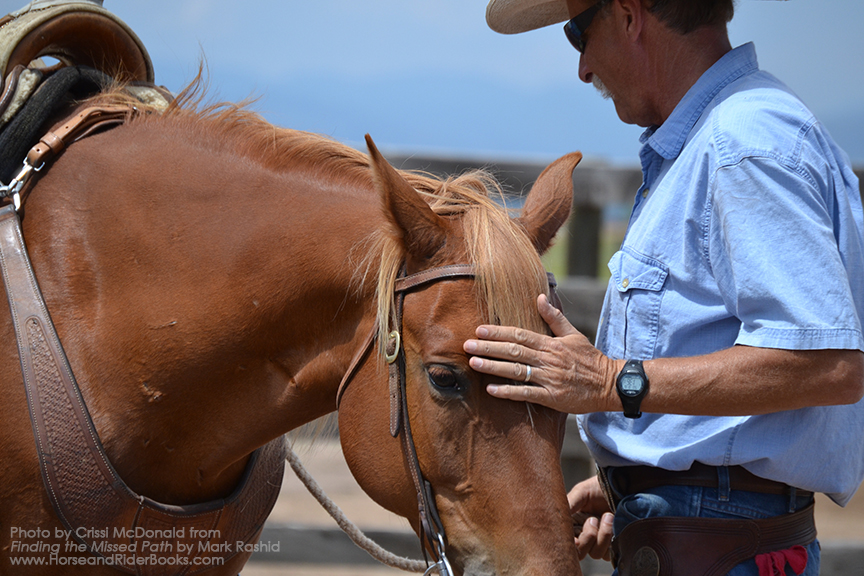 “A common problem with lateral flexion is that even when done correctly…it is simply practiced too much,” writes renowned horseman Mark Rashid in his new book FINDING THE MISSED PATH: THE ART OF RESTARTING HORSES. “Now I realize there are folks that teach who say that lateral flexion can never be done too much. Others will tell us to practice lateral flexion for hours at a time, and still others will tell us that we should never even think about riding our horse without first making sure the horse flexes laterally at least 25 or 30 times in each direction.

“Even though there are some who will tell us that flexion can never be done too much, the truth is, horses often say something different. Over the years, I have run into hundreds, if not thousands of horses that show obvious signs of being overflexed,” says Rashid.

The signs he highlights in FINDING THE MISSED PATH include:

“Many overflexed horses will simply stand with their head turned and their nose all the way around to the rider’s boot,” Rashid goes on. “When the rider asks the horse to straighten his head, he often just turns and puts his nose on the other boot. In cases like these, lateral flexion has been done to the point where the action itself has become little more than a default movement for the horse. In other words, the horse will laterally flex himself regardless of the situation or circumstances, and whether or not he is even being asked.

“Another thing that happens when the horse is overflexed like this is the joint at C1 actually becomes what we might refer to as ‘hyper-mobile,’” he adds. “When this happens, the horse literally loses the connection between his head and the rest of his body while being ridden. There are a number of serious issues with a horse losing this connection—for both rider and horse—not the least of which is a total loss of overall control. But even more concerning is that losing this control can, and usually is, quite difficult and very time consuming to correct.”

So should we no longer practice lateral flexion in the way that so many trainers have advocated over the last decade or so? Rashid says not to be hasty—there are still benefits to be had from conscientious use of the exercise.

“Understanding proper lateral flexion is an important part of a horse’s education, whether we’re talking about a young horse that’s just starting out, or an older horse whose education has somehow gotten off track,” Rashid explains. “I prefer to practice things like this with a sort of ‘as we go’ attitude or mentality: Rather than getting on my horse and saying to myself, ‘Okay, now we’re going to do some lateral flexion,’ I’m more likely to spend time on it while I’m going about whatever business I’m doing with my horse on that particular day. If I’m doing clinics, for instance, I might ask him to flex laterally while I’m turning him as we get ready to move from one place to another. If I’m on the ground and we go through a gate, I might send my horse past me through the gate then ask him to flex when I bring him back to me as I close the gate. For me, putting a purpose behind the exercise eliminates the drilling aspect of it, which, in turn, allows the horse to stay mentally and emotionally engaged in the process.

“I understand there are folks that feel differently about this, people who feel that the road to perfection is through lengthy, nearly non-stop repetition of exercises like lateral flexion. And for them, perhaps that is the key to perfect behavior and flawless responses from a horse. After all, there is no question that many horses, when given no other option, will most certainly repeat behavior that has been relentlessly drilled into them. But there is always a cost for a quest of perfection through mechanical repetition. Usually, the cost is that we end up losing the essence and personality of the horse. And, at least for me, that is a cost that seems a bit too high to pay.”

FINDING THE MISSED PATH: THE ART OF RESTARTING HORSES is available now from the TSB online bookstore, where shipping in the US is FREE.

Trafalgar Square Books, the leading publisher of equestrian books and DVDs, is a small business located on a farm in rural Vermont.