The World’s First Interview with Fergus the Horse: Fame, Friends, and the Future

Fergus the Horse, the world’s most famous cartoon equine, has entered that twenty-first-century hallowed realm of “Social Media Celebrity.” He shares his daily meanderings, nickers, and naps with over 300,000 Facebook fans, waxing poetic, pondering the philosophical, and garnering laughs by turns. Through all adventures (and misadventures) he is entirely authentic: the quintessential “Everyman’s Horse” with a herd of buddies eager to test their theories of humans and why they do what they do.

In October of 2015, Trafalgar Square Books (www.horseandriderbooks.com) published Fergus the Horse’s first book, a treasury of his comic strips and greatest online hits. THE ESSENTIAL FERGUS THE HORSE was an instant success, promising more published fun with Fergus and his gang in the years ahead.

We caught up with Fergus following the holidays and before a planned trip south with his creator (artist and horsewoman Jean Abernethy) and asked him about his fame, his friends, and his future. In his first ever media interview, Fergus graciously divulged a little of what goes on when the computer is shut down for the night and he can take a break from answering fan mail.

TSB:  Your creator Jean Abernethy modeled you a little bit after a favorite horse she owned when she was in high school. How do you feel the adventures you have had with Jean compare to the adventures she had with her “real” white-faced gelding?

FtH: She and that gelding were kids together. Their world was small then, she says, only encompassing a little farm in a rural neighborhood. They knew every inch of the roadsides, and back lanes of farms where the footing was good enough to go really fast. He seemed to enjoy it, too, and was never in a hurry to get back to the barn. There was freedom to explore the countryside in all seasons. She still tells me inspiring stories about waking up that gelding late at night in winter, and riding out into a bright snowy landscape, lit by a full moon, and how the horse’s footsteps made a bright “squeak” in the snow. I know that whether you’re a colt or a kid, that kind of inspiration stays with you forever.

The adventures she and I have had since then have traversed a broader world. We’ve been far and wide, visiting barns, trails, forests, cities…we’ve visited professional horses and equestrians of different breeds, sports, cultures, and climates. We don’t ride as fast as she and that gelding did back then, but we go further.

TSB: Do you like your name? How did Jean come up with it?

FtH: I’m very proud of my name. Jean says her grampa was named Ferguson Abernethy, and that his friends called him “Ferg.” I like the name “Fergus” because it gives me a place to look for a missing shoe.

TSB: How does it feel to (almost) always be missing a shoe?

FtH: I like it! It feels a bit weird, but it keeps me focused on my feet, and gives me a constant supply of excuses!

TSB:  You have an eclectic group of friends that appears with you in your comics. Who is easy to get along with? Who is a troublemaker? Who would you rather be hitched to a stagecoach beside? Who deserves a comic of his or her own?

FtH: Art, the Paint Horse, is a long-time friend. I can really confide in Art. Toublemaker?  Hmm…. well, Dottie is hard to understand, she has a lot of “issues.”  Grace seems to have good ideas, but her ideas usually get us into trouble…(sigh)…mares…

I would really like to be hitched beside Kase, because…well Kase is a movie star! He is only hitched to the most elegant of vehicles, which are easy to pull, so the whole turn-out is like an art-form! But Kase says I don’t have nice hair. Then again, my buddy, Cleveland Ray, is very, very patient with me.

Maybe Clevis deserves a comic of his own. He’s so off-the-planet smart, though, the rest of us horses (and people, too) might not get the punch-lines!  Yesterday, while we were chewing around the hay bale, he mentioned something called “Quantum Physics.”  I wonder what that is?

TSB:  You have appeared in a lot of important places around the world, and in the company of some well-known horses and people. Name one of your favorite places you’ve appeared and tell us why you liked it so much.

FtH: The apple orchards in Annapolis Valley Nova Scotia, Canada, were the BEST, hooves down!  Never in my life have I seen so many apples! Oh it was heavenly! Oh the smell of it! Apples and grass….just apples and grass. More apples and more grass…!!! OMG!

TSB: You now are the star of your very own book. How does it feel to be immortalized in print? What is your favorite part of your book?

FtH: Wow a book! Yeah…wow! (Clevis said he proofread it, but I don’t know if I believe him.) “Immortalized!?” Is that what a book does?

My favorite part of the book is the first page that I have signed for everyone. It was tricky, because books are very little, but I did it! I am so happy to share laughs with everyone, and this page is my tribute to cheerful humans everywhere. We horses know that a cheerful, laughing human is much less likely to hurt us than a grouchy one. Thank you, Trafalgar Square Books, and Jean, for helping me get my foot in the right place.

TSB: If you could hand your book to one horse or human celebrity, who would it be?

FtH: I would like to give my book to Black Beauty. He lived through some rough stuff, at a time in history when horses really had to work hard, and forgive a lot of humans, just to survive. He did a good job, and thank heavens, ended up with a decent retirement. I would like to reassure Black Beauty (and the millions of horses who worked like he did) that life is getting more fun for horses…that a human, laughing, can break the ice in the hardship. If Black Beauty could see us today, he would see that humans are a better source of humor now, than at any point in our history!

TSB: Tell us about the first time you remember someone trying to ride you.

FtH: Oh, it was a bit bizarre, but not really scary. I’d seen him sit on other horses, but somehow never suspected he’d do it to me. The young lad, you see, he’d leant on my back a lot when I was just a weanling. I missed my mom then, and needed a friend. The young lad was a good friend to me. I think he needed a friend, too. He spent time with me, talking and brushing…sometimes he’d ask me to pick up my feet.  He’d put saddles, then harnesses on me many times.  He’d driven me too, with long lines…we’d done the whole lot by the time I was nine months old. I was a two-year-old when, one day, he climbed right up on my back!  I said, “What are you doin’ up there?”  He said, “We’re doin’ all the same things we done before.” I said, “No we’re not!” He said, “Yes we are!” I said, “This feels weird!”  He said, “I don’t care!”

His legs felt strange, squeezing nudging, but I understood his words from ground driving, and I understood his cues on the bit, right and left, so I figured out what he wanted me to do.  Second day I bucked and jumped a little just to see if he’d really thought it through. He had.

TSB: Tell us about the first time you remember someone falling off you.

FtH: OH IT WAS AWFUL!!!!!  My rider was under-confident. She completely lost her composure, and her balance, she got all scared, I don’t know why, then I got scared because she was scared. Then she was sliding down my side in the most creeeeepy way, ….auugh!!!! Then she was on the ground in a heap and I didn’t understand why! I was scared I’d done something wrong, and my saddle was pulled to one side, and I stepped on my reins…and I was so afraid!  It was wrong to run, and it was wrong to not run… It was terrible! Let’s talk about something else, please.

TSB: If you were trapped on a desert island with a human and a book, what would the human be like and which book would you choose for him or her to read?

FtH: The human would be a vegetarian, and the book would be called “1,001 Good Reasons to Stay a Vegetarian or JUST EAT FISH”!

TSB: If you had an iPad and WiFi on your island, what movie would you stream for you and your human pal to watch?

FtH: I would stream Ice Age because I love all the funny characters in it.

FtH: I think social media is great because I can share ideas with herds of people and horses all over the world. Jean even says some of them are already in tomorrow, but I don’t believe her. No one is ever really in “tomorrow,” they’re only in “right now.”

I like to share serious horse logic with people and horses everywhere.  The Incorrigible Digging Horse story is a good example of that. I don’t know why people don’t understand my train of thought, they just laugh. But I guess that’s OK.  People don’t know it but when they laugh, everything around them just feels better.

TSB: What is the quality you most like in a friend?

FtH:  Someone who pays attention. Someone who listens, and makes time for me in his or her life. I like a friend that has a nice big tail, and is the same length as me, so we can keep the flies off each other’s faces in the summer time.

TSB: What is the quality you most like in a human?

FtH: Someone who pays attention. Someone who listens, and makes time for me in his or her life…and knows where my favorite scratchy spot is.

TSB: If you could do one thing in the world that you haven’t yet done, what would it be?

FtH: Win an argument with a cow.

TSB: What is your idea of the perfect meal?

TSB: If you could have a conversation with one famous person or horse, alive or dead, who would it be?

FtH: I would like to have a conversation with Dr. Seuss. 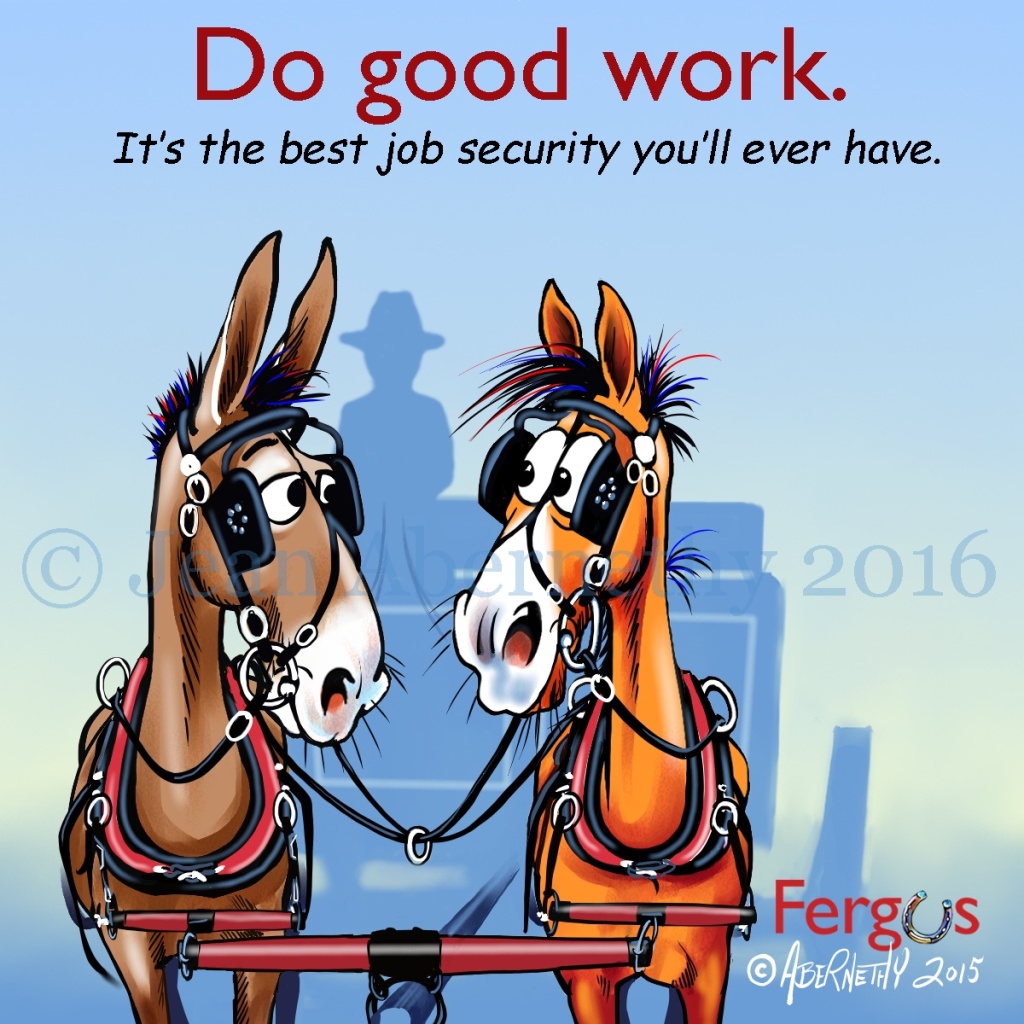 TSB: What is your motto?

FtH: Do good work. It’s the best job security you’ll ever have.

THE ESSENTIAL FERGUS THE HORSE is available from the TSB online bookstore, where shipping in the US is FREE.

Trafalgar Square Books, the leading publisher of horse books and DVDs for 30 years, is a small company based on a farm in rural Vermont.