Question: My horse lacks “crossing” in his legs (lateral reach) in the leg-yield—what do I do? 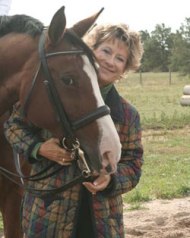 USEF/FEI dressage judge Janet Foy has a new book coming…and you could be a part of it!

“The difference between a ‘7’ and a ’10’ in leg-yield in a dressage test is that while both horses go from Point A to Point B correctly, the horse that receives the higher score takes fewer strides to get there,” says USEF S and FEI 4* judge Janet Foy. “Later in training you can use the leg-yield to increase the lateral reach in the half-pass.”

We learn in Janet’s hugely popular book DRESSAGE FOR THE NOT-SO-PERFECT HORSE that the difference between a high score and a modest score from the judge is really the amount of lateral reach the horse can show. From Point A to Point B, your horse may be able to do it in ten steps, but another can do it in eight steps. Some horses, by nature, have quite a lot of lateral reach—but most horses are not perfect, and need a bit of work here.

So how can I improve my horse’s lateral reach?

“You may have to feel that you are actually pushing the horse sideways out of balance in order to increase his lateral reach,” says Janet. “The horse must really open up the angles of his shoulders. Don’t ride a leg-yield at home as you would at a show. Your job in training is to raise your standards and develop more lateral reach and suppleness than you would need in competition. If your horse can easily do a leg-yield at home with energy and ease, then when it comes to show time and the requirement is easier, he will be a star!

“Try counting the number of strides it takes you to get from Point A to Point B,” she says. “Do this in both directions. One direction will take more strides because the horse will be less supple this way. First, work on this more difficult direction until it matches the other side. Then, when both sides are equal, start working again on improving overall lateral reach. you should be able to take out a stride or two each direction.”

And, fewer strides in the leg-yield means better scores in your next test!

Do you have a dressage question to ask Judge Janet?

TSB invites YOU to ask her your most burning dressage question—it can be about riding, training, competing, judging…whatever! It can be something you’ve asked a million times but still “just don’t get,” or something you’ve always been afraid to ask. It can relate to Training Level or Grand Prix or anything in between.

Click the image above to ask Judge Janet Foy your dressage question!

Plus, everyone who submits a question is automatically entered to win a personalized copy of Janet’s forthcoming book when it’s published!

So you and your horse could win in more ways than one!

DRESSAGE FOR THE NOT-SO-PERFECT HORSE, the bestselling book by Janet Foy that Dressage Today magazine called “an inoculation against training despair,” is available now from the TSB online bookstore.