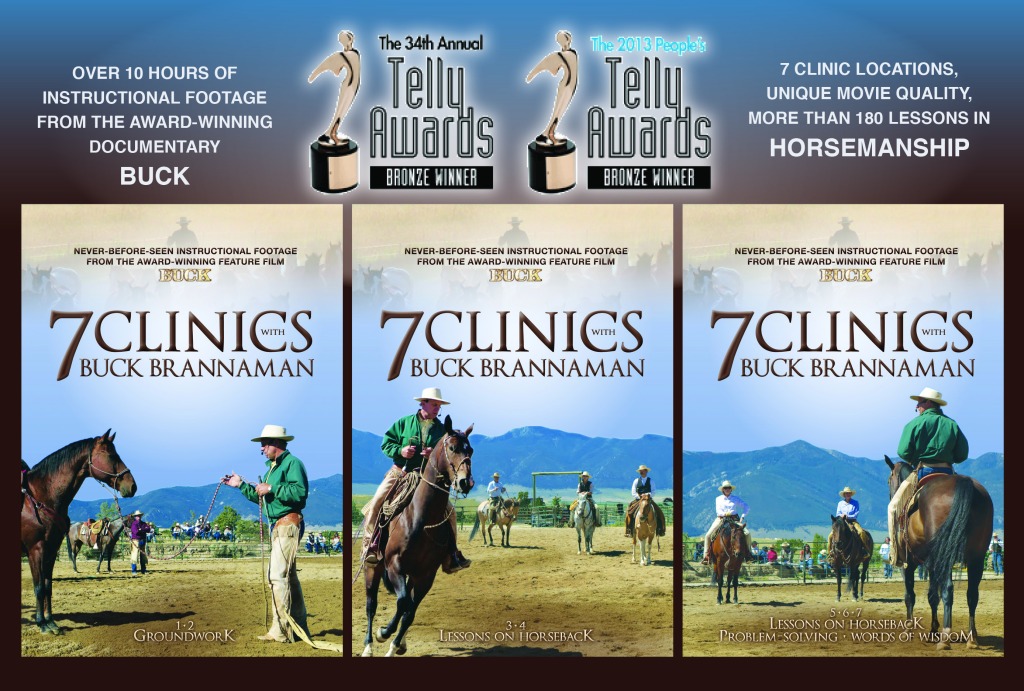 TSB is thrilled to announce that 7 CLINICS WITH BUCK BRANNAMAN, seven-disc DVD series based on instructional footage from the hit documentary BUCK, has won two Telly Awards!

The Telly Awards is the premier award honoring the finest film and video productions, groundbreaking web commercials, videos and films, and outstanding local, regional, and cable TV commercials and programs. The 34th Annual Telly Awards (2013) received over 12,000 entries from all 50 states and 5 continents.

“The biggest challenge in creating the feature film BUCK was taking 300 hours of footage and cutting it down to 88 minutes,” says filmmaker Cindy Meehl. “We had so many wonderful interviews with amazing people…so much of Buck on the subject of life as well as horses…it was extremely hard to lose great scenes and stick to our story arc.”

So a year after BUCK won the Audience Award at the Sundance Film Festival and enjoyed wide release nationwide to critical acclaim, Cindy went back into the vaults, sifting through hours of unused footage from all the Buck Brannaman clinics filmed in different parts of the country over a period of four years, searching for the gems that didn’t make the final cut.

The result was 7 CLINICS WITH BUCK BRANNAMAN, a DVD series that viewers say is “like having Buck teaching you in person, right in your living room.” Viewers travel to several Buck Brannaman clinics to learn important groundwork and riding techniques, including: hooking on, leading, halter work, bridling, saddling, backing up, working in circles and half-circles, using the flag, firming up, good riding form and position, finding the release and a soft feel, attaining collection, moving off the leg, riding serpentines, “getting the life up” (finding animation), perfecting the stop, turn-on-the-haunches, transitions, jumping, and finding the feel.

In addition, Buck provides ways to solve problems, including crowding, biting, striking, fidgeting, rushing, anxiousness and sensitivity, and bad attitudes. The series ends with Buck’s best advice, tips, and ideas about working with, riding, and training horses, as he best tells it—forthright, honest, and with the integrity the world has come to expect of one of the finest horsemen of our time.

Check out this sneak peek from the DVD series:

7 CLINICS WITH BUCK BRANNAMAN is available from the TSB online bookstore.