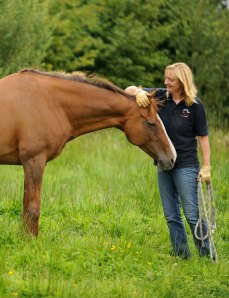 Vanessa Bee, founder of the International Horse Agility Club, spent the weekend at the Buck Brannaman clinic in Colorado.

Vanessa Bee, founder of the International Horse Agility Club and author of THE HORSE AGILITY HANDBOOK and HORSE AGILITY: THE DVD, is in the United States beginning her North American clinic tour (see our previous post for dates and locations). Part of her reason for making the cross-Atlantic trek was to see Buck Brannaman teach, in person!

“I absolutely love the 7 CLINICS WITH BUCK BRANNAMAN DVDs and have watched them over and over,” said Vanessa when she announced her tour in February. “They are completely addictive. I am so impressed, but I do have questions…and there’s only one way to find the answers—ask the man himself! So I’m flying over from the UK to watch him work in Colorado…that’s how good I think this man is!”

Vanessa was kind enough to share some of her observations from the time she spent this past weekend at the Buck Brannaman clinic in Hayden, Colorado—it is always so interesting to hear one trainer’s observations of another! Check it out:

“We flew from England to Denver and drove over the mountains in blizzard conditions to get here, but I knew it was worth it. I had already watched the excellent 7 Clinics DVDs many times and of course had a few questions. I was hoping that by watching everything in real time I would be able to see the techniques and changes in the horse more clearly.

“Fortunately, I brought my binoculars. I know some people thought this was a bit strange, but I’m an eccentric English woman so can get away with most things! Those binoculars made all the difference—I could really see the man work, when he quit as the horse got the answer—MAGIC!

“The first day was split into two parts: The morning was Colt Starting and the afternoon was Horsemanship 1. The colts were all shapes and sizes with handlers of varying ability, so Buck had his work cut out keeping everyone moving forward. First he made sure everyone could move their horse’s feet and retain a safety bubble that the horse would respect. He gave a nice demonstration of teaching a horse where the boundary was and commented that you have to learn how much to do that says STOP!

“You have to mean it but not by being mean to the horse.

“I had my first question answered on when to use the flag and how the horse knows when it means something to him and when he has to ignore it. It’s all in the hand position, which transmits the intention of the handler. I invested in my own BB Flag, and somehow I have to get it into my suitcase for the journey home!

“At the end of the session Buck gave everyone homework: They had to practice flexion, backing up, picking the rider up from the fence, lowering the head, and putting the bridle on. And they had to practice because, as he said, he would know in the morning if they hadn’t!

“It was going to be interesting to see if all the colt starters had done their homework, and they did look pretty good as they lead their horses into the arena. Buck was warming up his horse first thing. He talked about how he was looking for ’weightlessness’ as he was working. It was quiet and precise, the way he worked. Disengaging the hind end, moving the front over, backing up just seeking the moment when there was no weight and he instantly quit.

“I used my binoculars zoomed in on every move. I don’t know how anyone could see the finer details and understand when the quit was valid without being close up. That’s why the 7 Clinics DVDs are so good. I shall certainly be studying these in even more depth on my return home.

We’re lucky to have Vanessa Bee reporting back from this fabulous Buck clinic experience!

“Buck is direct, I like that. He made a few choice comments, including: ‘If I could get my students to spend less time on ’Wastebook’ and more time with horses they’d have a stable full of bridle horses.’

“I’ve watched a lot of horse clinics and horsemen and I can tell you that Buck is the only person I’ve seen whose feet are the horse’s feet. He just moves those feet like they were their own. It’s smooth and you never feel a wince or a jar as you watch him work. His timing is fantastic.

“He was very honest and direct and I really enjoyed his style of teaching. Buck said, ‘Everything I do with a horse is incremental that’s why I’m successful with them.’ In other words, he tries never to overwhelm the horse and give him too much to think about.

“Buck told us that Ray Hunt was always saying to him: ‘Do less sooner, then you won’t need to do more later.’

“I and my binoculars are beginning to see that now.”

Thanks, Vanessa, for making it feel like we were at the clinic with you!

You can order the 7 CLINICS WITH BUCK BRANNAMAN DVD SERIES, plus Vanessa Bee’s HORSE AGILITY HANDBOOK and HORSE AGILITY DVD at the TSB online bookstore.