Some of the horse books from my childhood remaining in my collection.

My “grownup” bookshelf still holds the tattered remnants of what once were my favorite books. I was a voracious reader as a child, and though the topics of interest were many and varied, you could always sell me a horse book. The story lines were usually familiar—there was often a young boy or girl with a dream of a horse of his or her own; a plot that highlighted ambition in the show ring or on the racetrack; there might also be a challenge to conquer a jealous rival or a need to overcome an injury that threatened tragic loss. 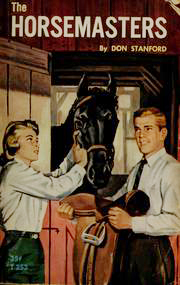 One of my all-time favorite horse books.

Whatever the formula, horse fiction was a winner, and I especially liked the books that rang true to my young equestrian ear. An old favorite of mine was called The Horsemasters by Don Stanford—there’s a scene where the main character has to ride through a grid with no reins and no stirrups, and my heart still speeds up as I think about facing the daunting exercise! When I first started at Trafalgar Square Books, Managing Director Martha Cook and I bonded over a common love of this particular book.

As TSB now releases an all-new fiction series for young horse lovers, beginning with CROWN PRINCE and its exciting followup CROWN PRINCE CHALLENGED, it seems a good moment to ask the other horse people in my life which books they remember reading as horse-crazy kids.

“That’s easy for me,” responded TSB Promotions Director Julie Beaulieu. “I loved the ‘Billy and Blaze’ books [by CW Anderson] and a book named Moorland Mousie [by Golden Gorse].”

FEI and USEF dressage judge Janet Foy, author of the bestselling DRESSAGE FOR THE NOT-SO-PERFECT HORSE, was also prompt in her reply.

“I had two favorites that I read over and over,” she said. “Afraid to Ride by C.W. Anderson was a great story about a girl who had a horse accident and was afraid to ride, until she found the perfect horse, and then King of the Wind by Marguerite Henry.”

Janet wasn’t the only one to give Henry’s book about Arabians the nod.

“My favorite book growing up was King of the Wind by Marguerite Henry,” said Cindy Meehl, director of the award-winning documentary BUCK and the new instructional series 7 CLINICS WITH BUCK BRANNAMAN. “I loved it, and it made me cry.”

I also asked Denny Emerson, USEA Hall-of-Fame Inductee and author of the phenomenal HOW GOOD RIDERS GET GOOD, his thoughts on the subject.

“Early on, the whole Black Stallion series,” replied Denny. “Then the Mary O`Hara trilogy: My Friend Flicka, Thunderhead, and Green Grass of Wyoming.”

“When I was 10 I read My Friend Flicka by Mary O’Hara and became addicted!” agreed Vanessa Bee, Founder of the International Horse Agility Club and author of THE HORSE AGILITY HANDBOOK. “I now read the trilogy at least once a year; they are my soul food. Although I must have read My Friend Flicka a hundred times, I still hope that Flicka survives, and I cry at the end when she calls to Ken as he runs to her in the pasture! (I’m welling up now…) This deep love that Ken found in his relationship with Flicka, it’s what I look for every time I reach out to a horse.”

Flicka was a horse that left an indelible mark on many of us. Melinda Folse, author of THE SMART WOMAN’S GUIDE TO MIDLIFE HORSES counts herself as one of them. When I asked her which books meant the most to her in her early years, she replied, “Well, My Friend Flicka, of course…and The Black Stallion, of course…and the rest of each series. And there was a kind of obscure one that I read so many times it fell apart…” Melinda went on. “It was called A Horse Called Bonnie, and its sequel, The Sweet Running Filly [by Barbara van Tuyl and Pat Johnson].”

Well wouldn’t you know it, I loved both those books, too. The “Bonnie Books,” as we used to call them, were rereleased in 2010.

There’s a whole generation of young readers out there who deserve stories about horses, good horsemanship, the value of hard work, and dreams that come true. We hope the characters from THE BROOKMEADE YOUNG RIDERS SERIES by Linda Snow McLoon—beginning with CROWN PRINCE and its followup CROWN PRINCE CHALLENGED—both entertain and teach lessons, with a healthy dose of “horse” along the way.

CROWN PRINCE and CROWN PRINCE CHALLENGED are available from the TSB online bookstore, where shipping in the US is always FREE.